I had spent the previous day in Cusco getting prices from Travel Agencies for tours to the 'Sacred Valley of the Inca' also known as Urubamba Valley. 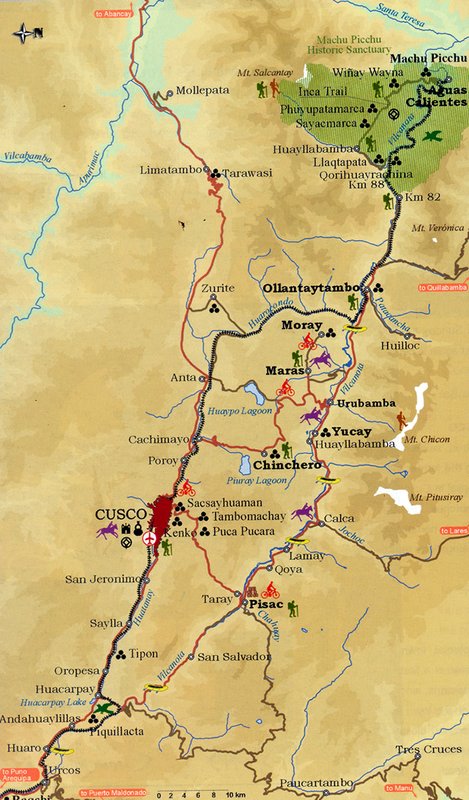 Located 20kms from the Inca capital of Cusco, this rich valley in the Andes is where numerous archaeological Monuments, Indigenous people and fruit and vegetables are grown to supply Cusco.
This was the agricultural, spiritual and political centre for the Incas. 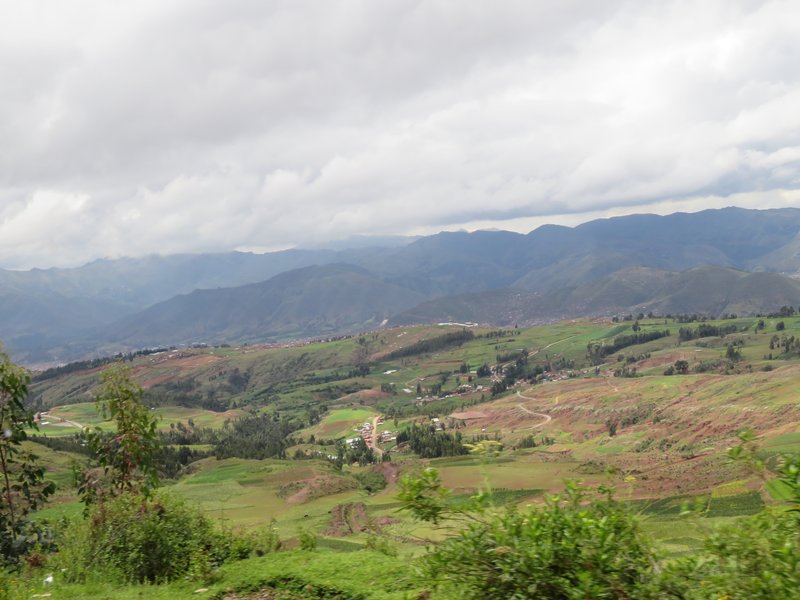 On our way to the Sacred Valley by bus

I was amazed at the huge variation in prices for seeing the same sites, in-fact, you could pay $80[us] and see much less than I did. I decided to book the cheapest [machupicchuconextiontravel] and see what I got. Really I couldn't see how there could be much difference. Most visit the same sites and leave it up to you to buy the Boleto Turistico (tourist ticket) which is needed to enter the Inca sites and you pay for your own lunch.
I did a group tour which I paid 25 Peruvian Soles = $7.80 [us] - very cheap for a day out covering 170kms. The guide spoke Spanish and English.

I was picked up from my Hotel at 8.10am and taken to where the buses were ready to leave. There were a few buses parked here and there, and there did seem to be some confusion about who was travelling with who. Eventually, the English speakers were put on one bus (only two of us) along with Spanish speaking tourists. 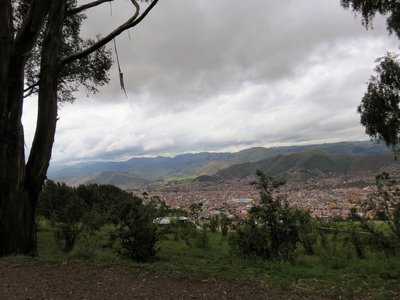 At 9.15am, our bus was on its way, soon leaving the city behind and climbing a steep, windy mountain road from where I had magnificent views over Cusco, mountains, valleys and villages. 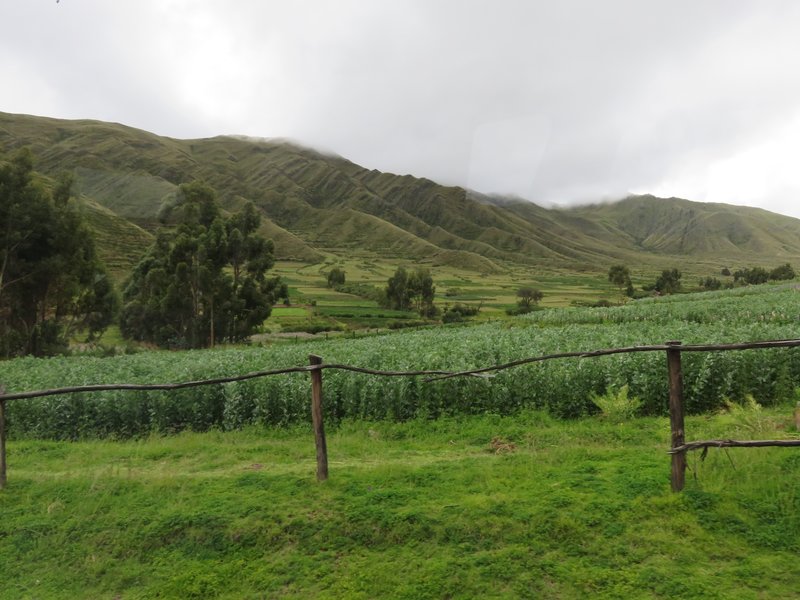 On the way to Pisac

On our way were saw many terraces, crops growing and the Inca site of Puca Pacara. The site was pointed out to us by the tour guide. Peruvian ladies had lots of their wares spread out ready to sell to people who did stop. 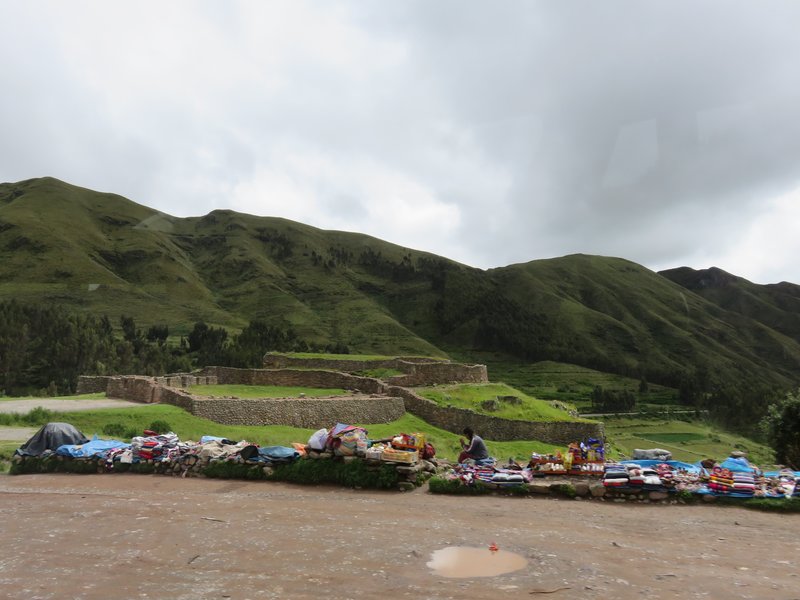 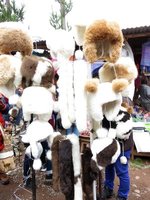 Our first stop was at a small village where a market was being held.
We were advised to use the (pay) toilets here as they were not readily available where we were going.

Next, it was time to browse the colourful stalls, trouble was most of the items were for cold weather and I came from the tropics, still, I did enjoy looking at what was on offer.

Prices were quite reasonable. 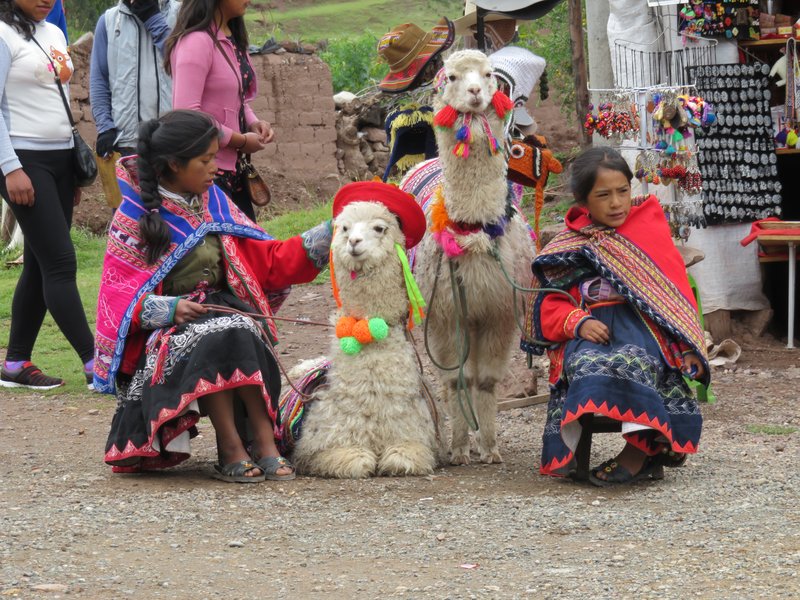 Particularly sweet, were the children dressed in traditional clothes sitting with their pet Llama hoping somebody would pay money for their photo to be taken, also further into the market were a husband and wife doing the same thing. 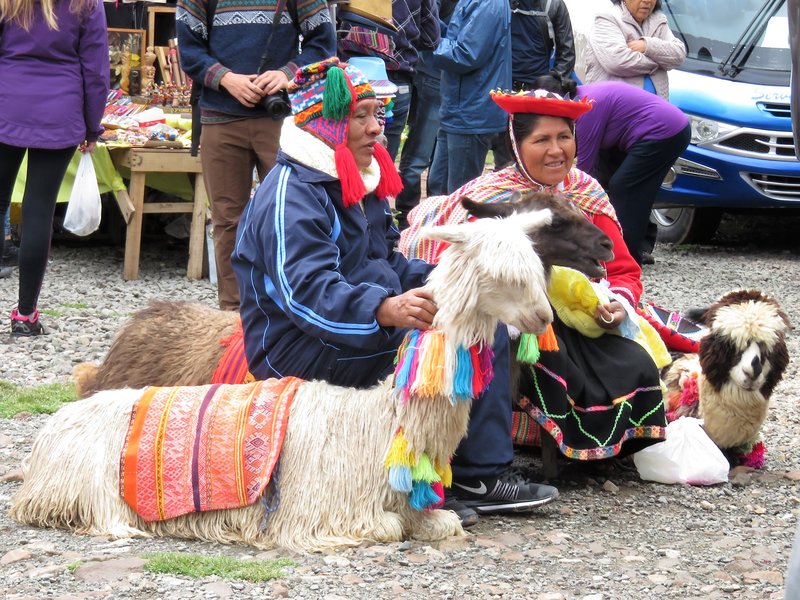 After leaving the markets, the bus followed the mountain road down to the valley where the town of Pisac was located - The views were wonderful! 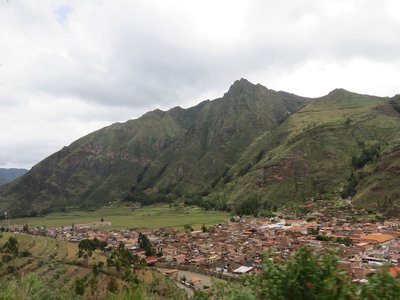 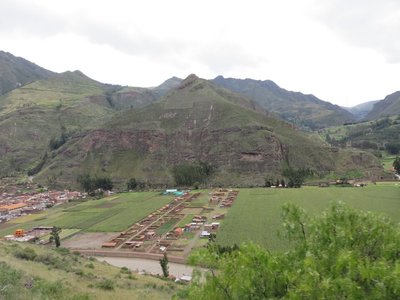 Looking down to Pisac'

We didn't stop at Pisac, instead began winding our way up the narrow mountain road to where the Pisac archaeological complex was located. 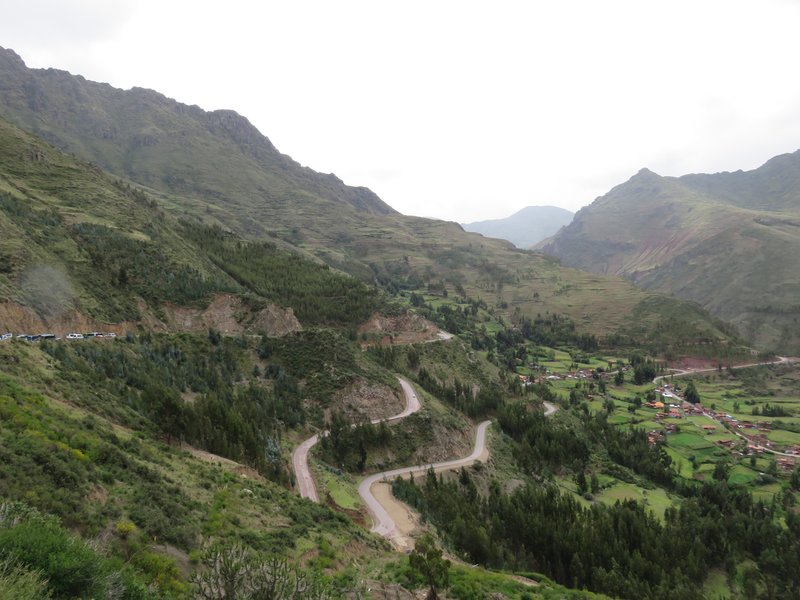 What a nightmare it must have been for the bus driver, although I guess he may be used to it. Buses were parked either side of the narrow road, leaving just enough room for one bus to pass through. Our driver took us as far as he could, then some how found a park further down the hill. 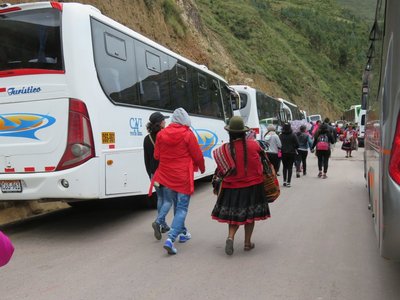 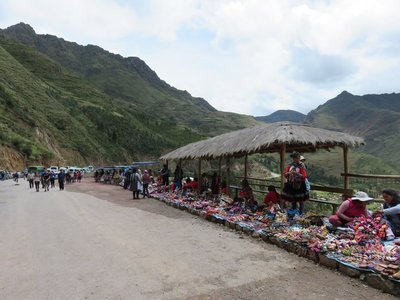 Lining the roadside were many stalls with lots of colourful gifts and colourful Peruvian ladies, no time for stopping now as we were following the guide, I stopped on the way back to the bus. 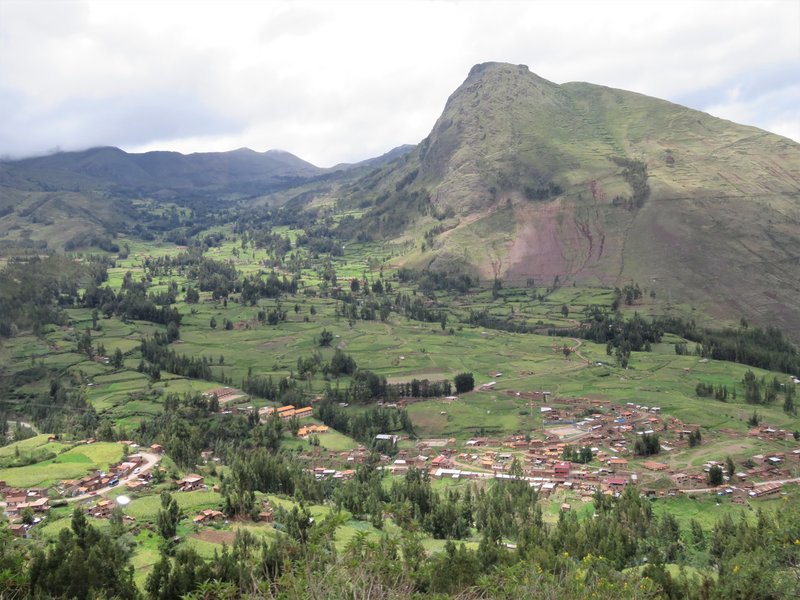 We stopped at a look-out and then followed our guide to the Inca ruins where he gave a talk about them, then let us explore by ourselves. I was glad I had a warm jumper with me as the wind had picked up and it had become quite cold. Many of my group were shivering, I imagine they would have been frozen when the misty rain began to fall when returning to the bus.

Pisac archaeological complex is believed to be a "Royal estate" built by the Inca Pachacutec. It consists of the terraces, Inca cemetery, the city walls and the "Amaru Punku" door also known as the "Gate of the Serpents,'' temples, homes, altars, carvings, tunnels and caves. 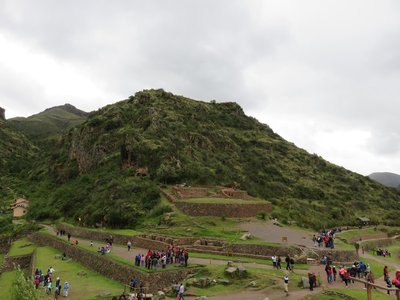 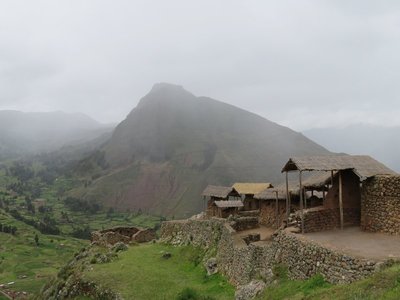 The ruins are separated along the ridge into four groups that include a number of bathes and temples. One is known as "The Temple of the Sun," a volcanic outcrop which may have been used for astronomical functions, another is Q’allaqasa, a Citadel which is built on a natural spur and overlooks the valley. 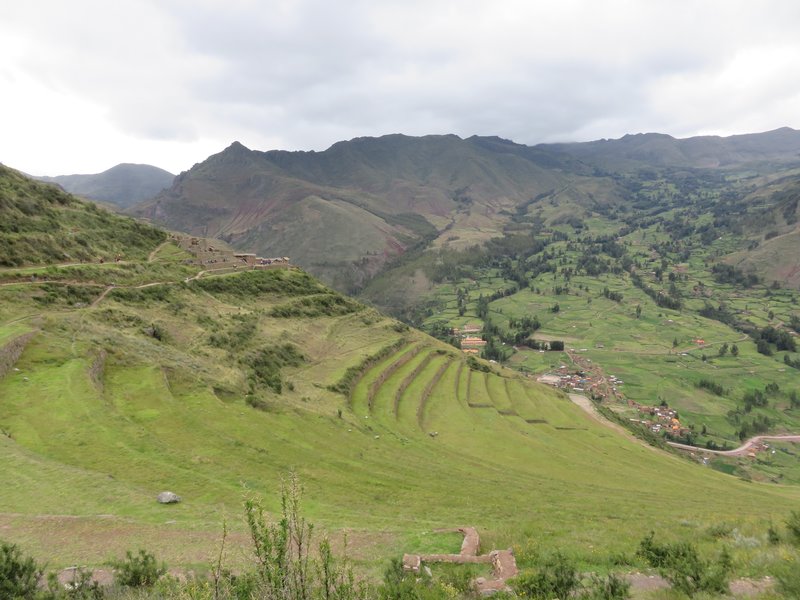 The hillside is lined with agricultural terraces constructed by the Inca, an amazing sight and very interesting one when I heard the details of how they were built by hand. They are still in use today. 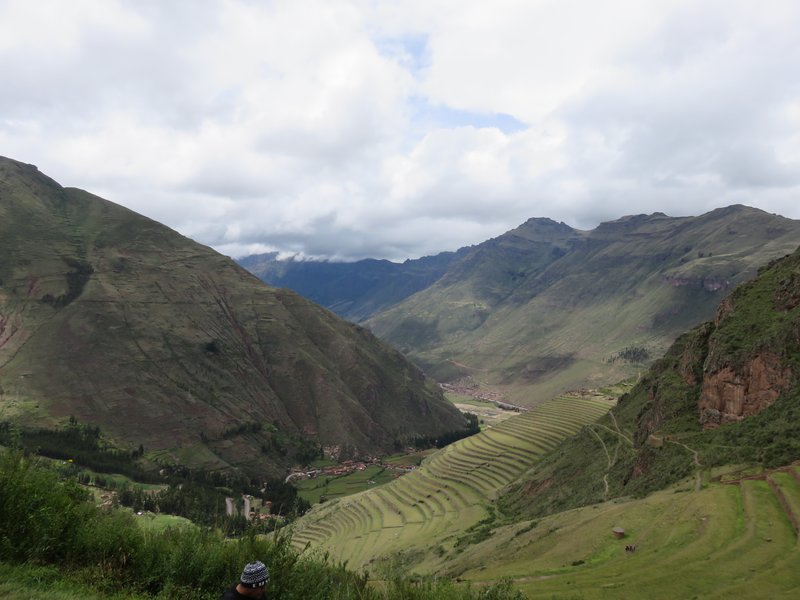 It was in this high altitude (3300 metres) that I began losing my breath when I tried to climb steps, this resulted in me not be able to explore the site like I had hoped to, still, I wasn't too disappointed as I was able to see quite a bit as well as the amazing views.

Once everybody was accounted for in the bus, it was time to drive down the mountainside then along the valley to the town of Urubamba where we stopped for a buffet lunch. After a nice lunch and a full tummy, it was back on the bus again for a drive to the archaeological complex of Ollantaytambo.

Ollantaytambo was a former Inca administrative center and gateway to the Antisuyo (the Amazon corner of the Inca Empire), also home of Inca nobility. The fortress of Ollantaytambo was the site of a major battle between the Incas and Spanish, the Incas won the battle, but only briefly as the Spaniards returned with more men and were able to capture Ollantaytambo. 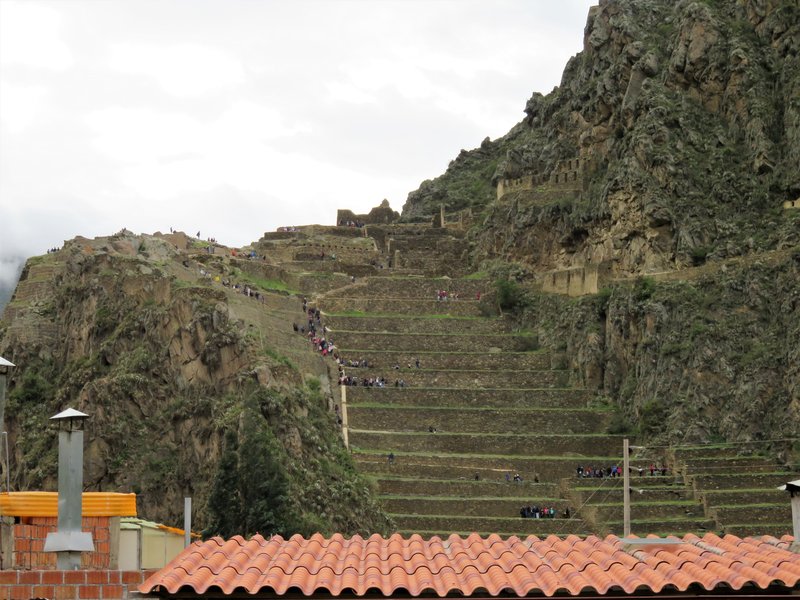 On viewing the steep set of Inca stairs I would need to climb to reach the top of the Ollantaytambo ruins, I knew I would not be able to do it, so I stayed behind and looked around town. 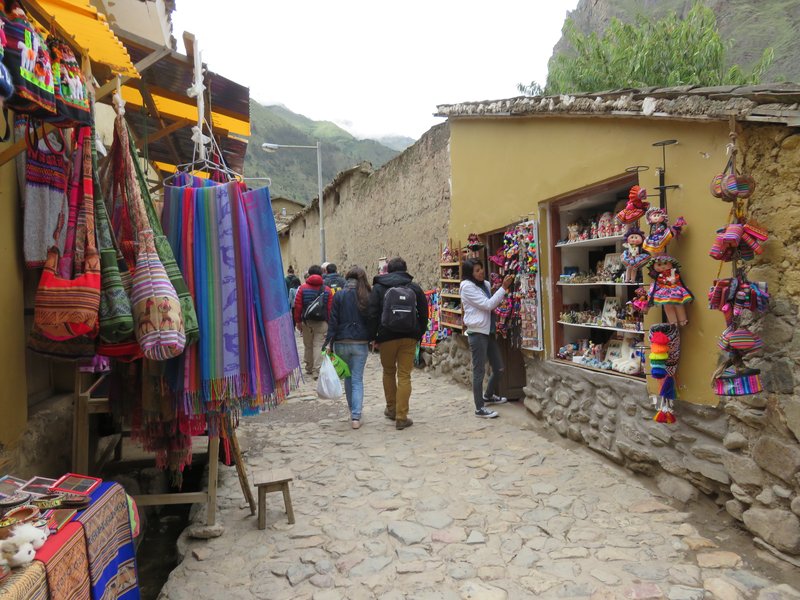 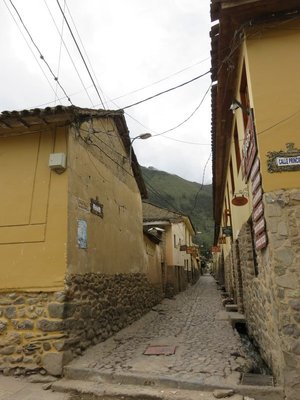 Some of the streets were quite narrow and the surface uneven because of the cobblestones. The street that lead from the bus car park to the entrance of Ollantaytambo archaeological complex was narrow and lined with souvenir shops along the way, then when exiting the street, I came across a big open area full of colourful market stalls. I was amazed to see a Tuk-Tuk, just like I had seen in Asia! 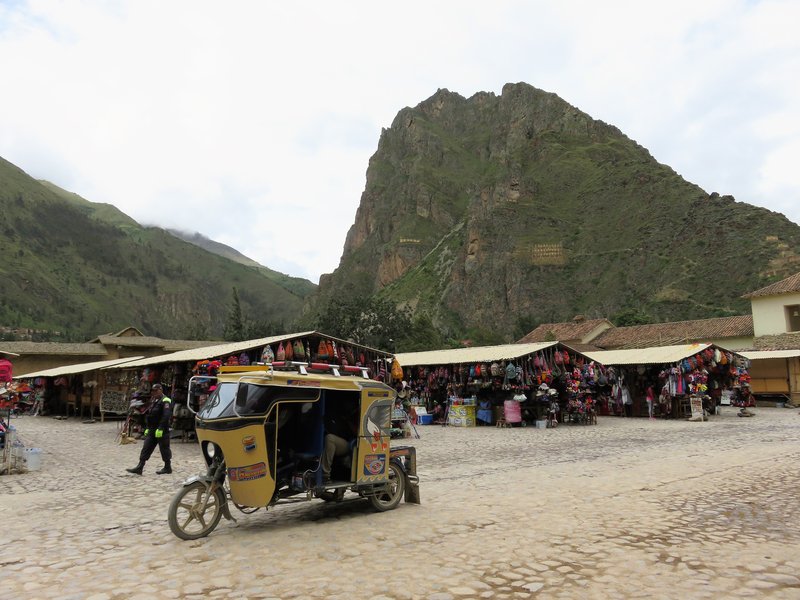 After having a browse around the markets, I then followed the main street until I reached the town square, which had a park in the centre and plenty of places to sit outside with a drink.
I had to wait quite a while for my hot chocolate which they told me they didn't know how to make! 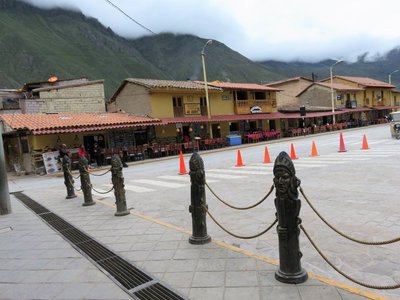 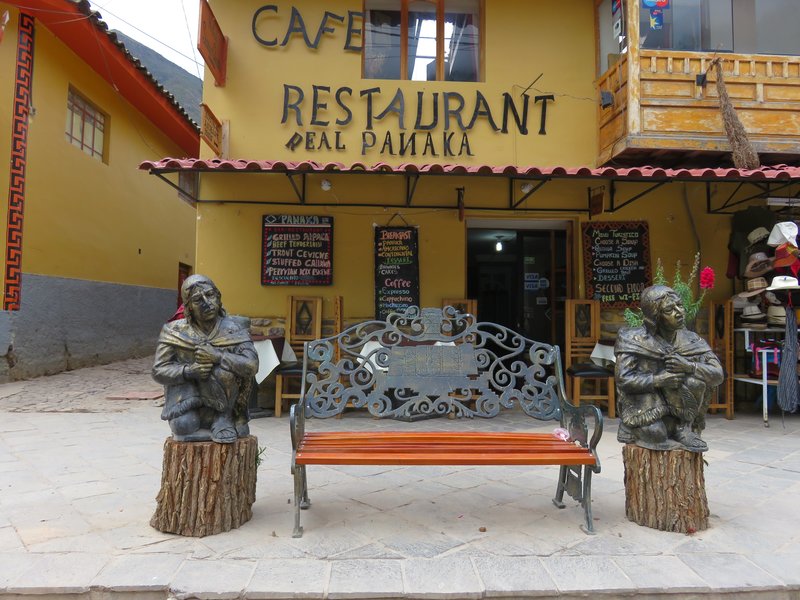 I thought the square was nice, especially the decorative garden seats with sculptures on either side. Even the rubbish bins deserved a photo as covering the top of each rubbish bin was a sculpture of a Puma (Uturunku), an animal the Inca people believed to the strongest and one who would give them courage and show them how to attack fear. 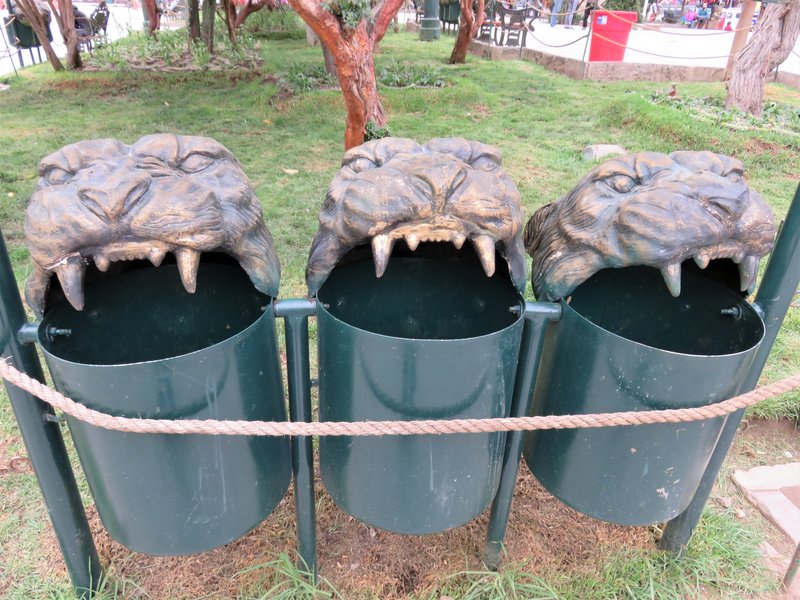 Rubbish bins
The Incas city of Cusco was designed as Puma shape, so the inhabitants would have no fear when intruders tried to attack the city.

Looking up, I noticed the street lights also had a sculpture of a Puma and a Condor. The Condor (Kuntur) was added because it flies and has freedom, hence the Incas believed to transform into this animal they would feel freedom in their soul. 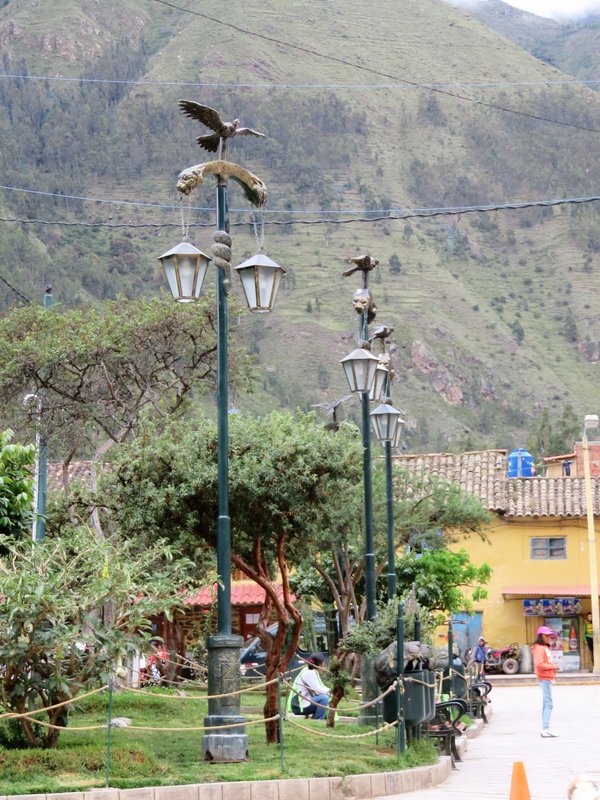 THE CONDOR -
''It's one of the most sacred animals in the Inca Cosmo Vision, because he lives on the heights and rules the skies, like he was the master of the wind, the clouds and the sky.'' 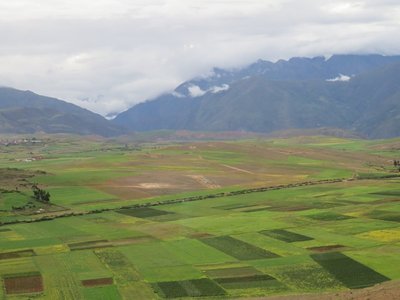 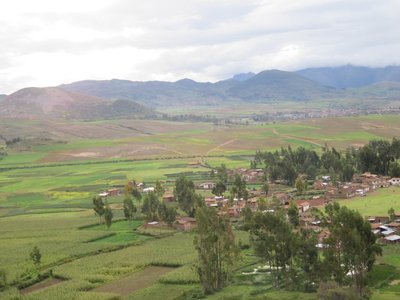 Travel to our next town was through magnificent scenery where the agricultural farms made the farmland look like an oversize patchwork quilt, Snow capped mountains added to the beauty. Finally we arrived at our second to last stop for the day, sadly, I have forgotten the name of the town. Some ethnic ladies showed us how they spun their yarn and made their clothing, then we could buy if we wished. 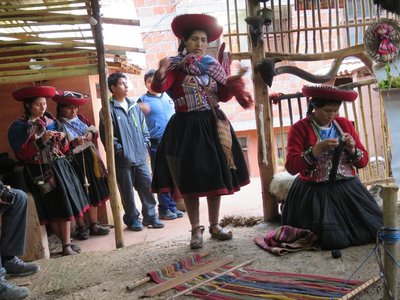 The last stop when nearly dark, was a quick walk to some Inca ruins, I think by then quite a few people were tired from all the steep walks as the tour guide had only a few that decided to go for a look.

Finally we made our way down the mountain and to the city of Cusco where we were dropped of in the main square. I caught a taxi from here back to my Hotel, arriving there at 8pm. It was a long one, but a really good day, made so by our informative guide, wonderful scenery and Inca sites, and a good lunch.

In my opinion, the Sacred Valley is a must visit when in Cusco

Tomorrow I catch the bus to PUNO.

Posted by balhannahrise 23:54 Archived in Peru

Previous Next Table of contents

Looks great. Shame you felt a bit ill at some sites. I want to go to Peru, too, but am a bit put off by the thought of altitude sickness. All the best, Irene

Hi Dee, As always excellent page! Would love to visit and the chance came up this year as a group from our local Orchid Society are travelling to Ecuador in November to attend the World Orchid Show, they will then continue on to Manchu Picchu.

Hi Mike,
Great to hear your going to Ecuador to see the orchids, imagine they would grow well over there. Have seen some nice photos of Ecuador, so will look forward to your blog when you come home. Enjoy Machu Picchu. Hope you don't suffer altitude sickness like I did.

This blog requires you to be a logged in member of Travellerspoint to place comments.

If you aren't a member of Travellerspoint yet, you can join for free.