It was an early start to the day as a Taxi was booked to arrive at my Hotel at 6.30am, then take me to the Turismo Mercano Bus depot. I had booked a ticket with this bus company as it did a tourist route between Cusco and Puno known as the "Route of the Sun.
I had researched the drive and it sounded an interesting and scenic trip, so I chose it over a short trip by plane. 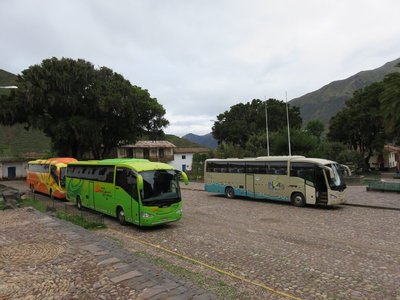 I did manage a quick breakfast before being whisked away to the bus depot where I was looked after by a hostess who gave me my seat number in the beautifully clean bright green bus. My seat was nearly at the back, as the bus was nearly booked out for the day I wanted.
Right on time at 7am, we pulled out of the depot and were on our way to Puno along with a hostess and guide. We hadn't gone far when a stop was made so the guide could buy some Chooka bread. He asked if anybody had tried it, as nobody had, he let us break a piece off to try - it was quite sweet.

35kms from Cusco, our bus turned into a narrow, bumpy, dirt road that led to the small village of Andahuaylillas where we were going to look at our first attraction, the “Church of San Pedro of Andahuaylillas,' built in 1631 by the Jesuits on the site where an ancient Inca Temple once stood. The church was built of thick adobe mud-brick walls which had recently been painted. 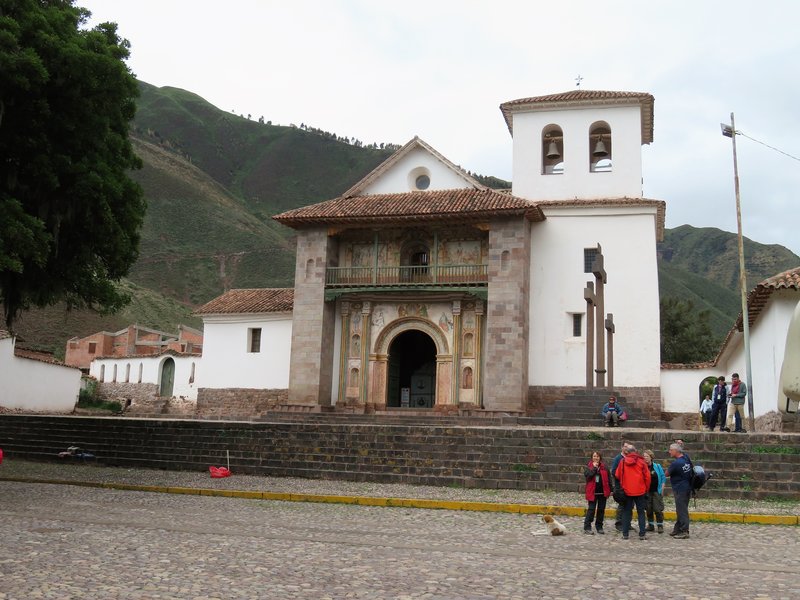 Even though the entrance had a mural, I was not prepared for the extravagant interior, decorated with some of the most valuable colonial art in Peru. Our guide told us about the Mestizo baroque architecture, typical of the Cuzco School which was prominent in the 17th century,
Our guide took us through the church of which there were many chapels lined with numerous famous paintings. One is a mural by Luis de Riaño representing the path to glory and the path to hell. 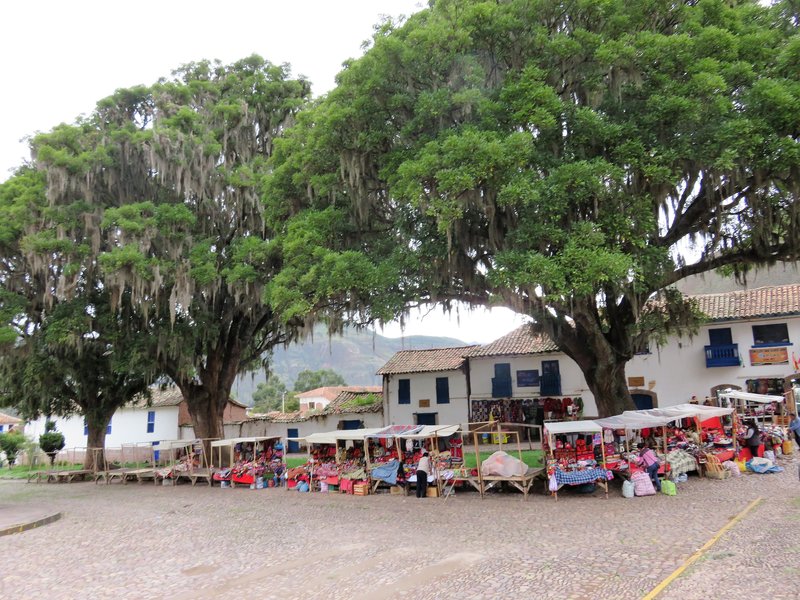 We had some time left after the guided tour of the church, so I went and browsed the market stalls run by the local ethnic Quencha ladies, then I walked around the square and found another building with some old murals. The Plaza is considered one of the best in the region. I liked the old leafy Pisonay trees (Coral trees) which in season are covered in bright red flowers.

Back in the bus, we drive past more villages, past magnificent mountains, a large river and farms growing different types of crops until we reach the small village of Raqchi, located 3460 metres above sea level. 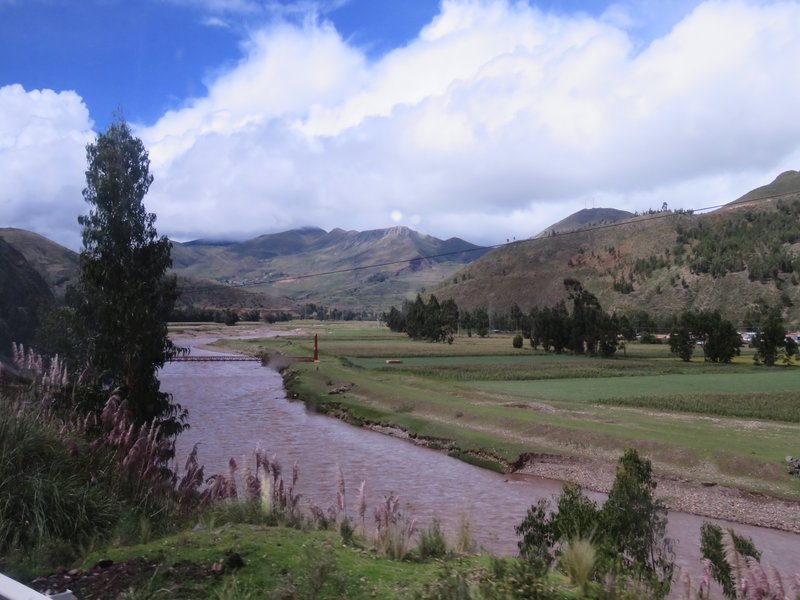 It was here we did a guided tour of the ancient Inca site believed to date from 200 BC, going on the Incan and Pre- Incan artifacts from many different civilizations being found. 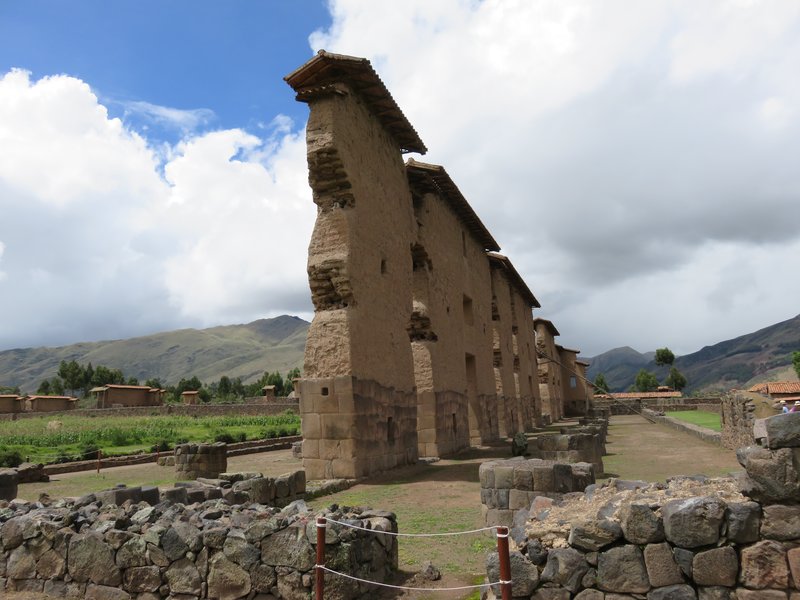 For me, the most impressive ruin standing was the Temple of Wiracocha that has 11 giant columns remaining of the huge two-story rectangular structure. The base of the wall is built in classic Inca style from around 1450 - 1532.

The citizens of Raqchi, produce textiles and pottery which can be bought from the market stalls in the square or the Pottery shop, where the artist was painting his pottery by hand. There was heaps of beautiful pottery for sale. 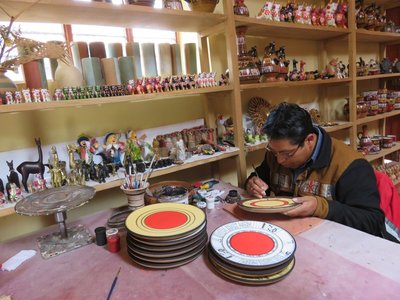 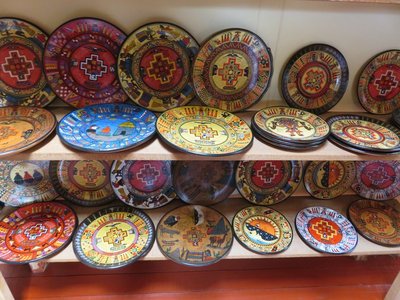 As I had time to spare before departure time,, I went for a look around the village. 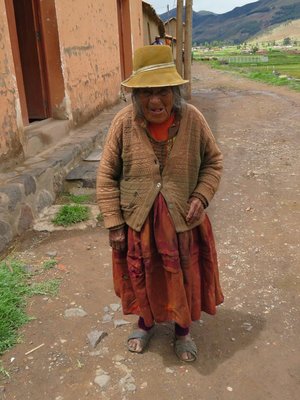 As I was walking along the pathway, the old lady in the above photo came out of a doorway, as soon as she saw me, she pointed to my camera for her photo to be taken, then held her hand out for money!

Small mud brick homes were scattered in amongst the crops surrounding the village. 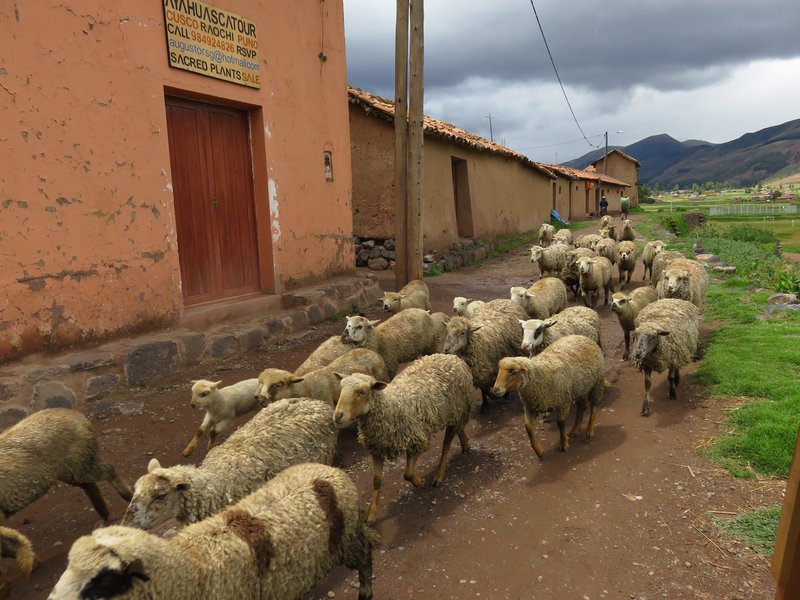 Whilst standing there looking, I noticed a flock of sheep coming towards me, so I stepped out of the way to let them pass. The shepherd was a long way behind, not that the sheep needed him, they knew they were going to the small lush green paddock beside the village. 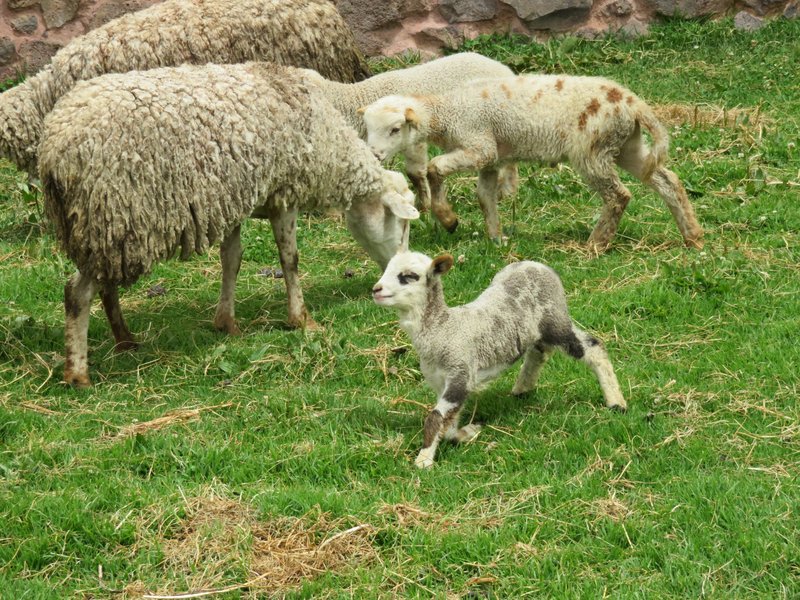 Our next stop was for lunch at La Pascana Restaurant,Sicuani. Located in a rural location overlooking a pretty waterfall, it was where most of the tourist buses stop for lunch. 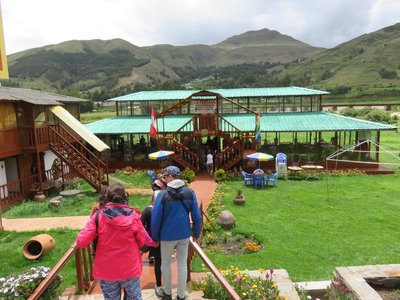 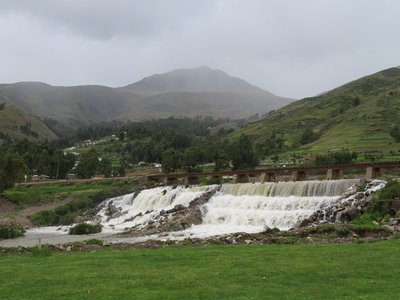 The Restaurant was lovely, so was the buffet lunch. Musicians were playing, the catch with them is they come around trying to get you to buy their cd or to give a tip. 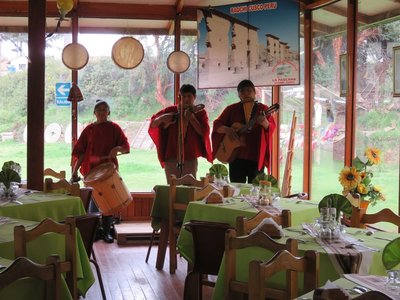 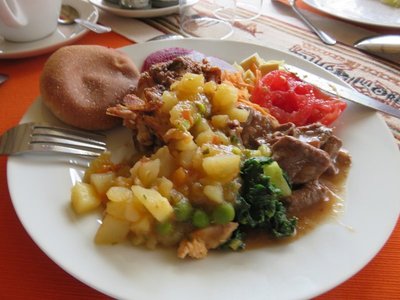 Outside was a young girl dressed in traditional clothing standing beside her decorated Llama waiting for people to pay for her photo to be taken. I could see the weather was changing and rain was heading our way, such a pity as we were soon to travel some of the beautiful scenery in this area.

There was quite a bit of excitement when somebody spotted a huge herd of Llamas feeding on the mountainside. The bus driver slowed down so everybody could have a good look and take photos - that was nice! 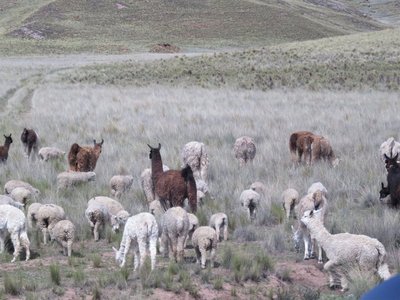 We were in the high country where the mountains and scenery was spectacular, a pity the mountains had fog and it had previously rained making it quite cold when we stopped at La Raya Mountain Pass - 4335 metres or 14,172 feet above sea level. 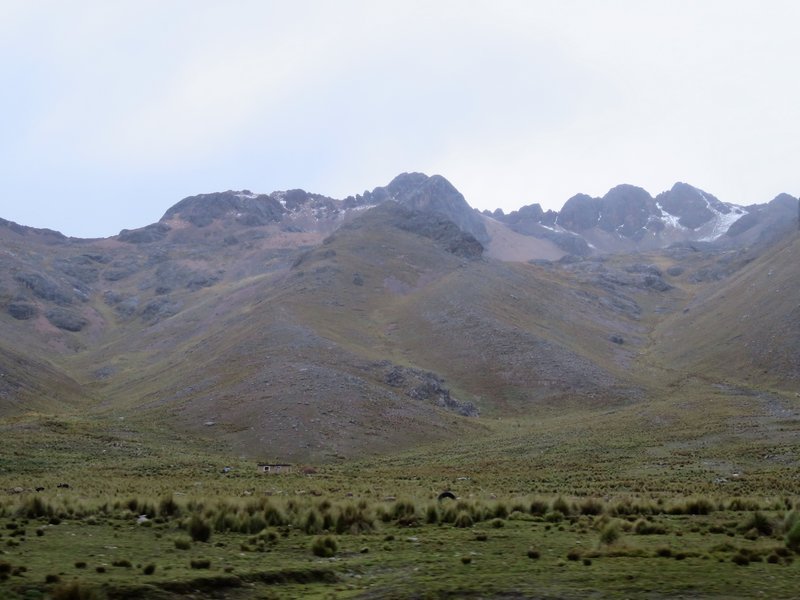 La Raya mountain pass marks the divide between the Puno and Cusco regions. As it was summer, the road wasn't closed, but it can be as it's prone to heavy mist and can be dangerous in low visibility conditions, also avalanches, heavy snowfalls and landslides can occur anytime. 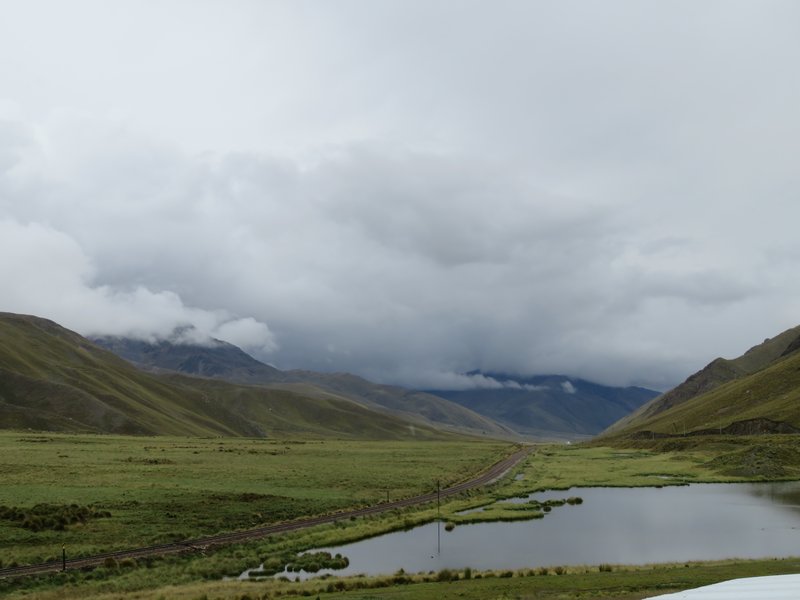 We stopped at the lookout where the poor ladies selling their goods looked cold and miserable, I would be too in this high altitude. Most of them had their wares covered, a few uncovered them briefly, but really nobody was interested in the cold, misty weather. 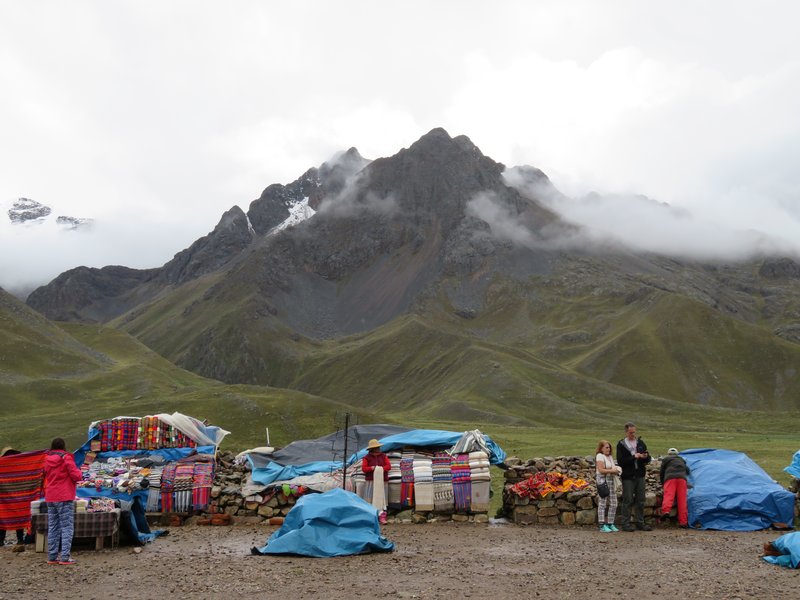 Earlier we had seen the Machu Picchu train, then when we reached La Raya Mountain Pass, the train was stopped there. Along with the station stood an old chapel standing all alone in the middle of the Andean plateau. 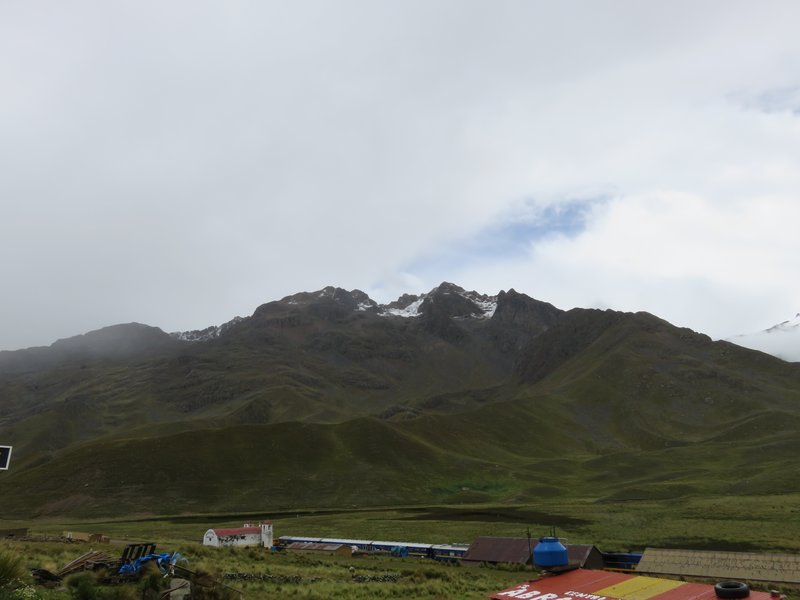 I was glad to be back in the warm bus and on our way to Pucara where near the town is an ancient archaeological site dating to 1,800 BC.
Travel was along the Andean plateau which was a picturesque and fertile area. 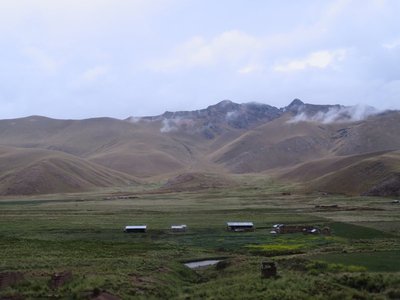 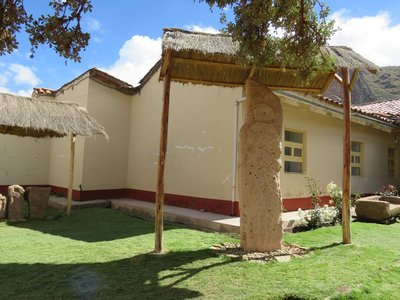 Pucara was another small village with hidden treasures.
Here we were taken on a guided tour of the Pucara stone Museum which had different displays of items from Pre -Inca culture.

I must admit I tired of the tour, too much information which I would immediately forget.

No photos were allowed of items on display, only allowed photos of displays on the lawned area.

At the time I was wondering why there were so many pottery bulls made for tourists, since then I have found Pucara is famous for "'Toritos de Pucara" - (Little bulls of Pucara)

Back on the bus for a drive of 107kms to our final destination of Puno.
I thought we were going to arrive early, that was before we had to drive through the city of Juliaca, a very busy city with terrible roads.
After navigating the city, we were on the final stretch, following the road down a hill from where there were beautiful views over Puno and Lake Titicaca, unfortunately, I was sitting on the wrong side of the bus. Lake Titicaca was so calm and so blue, I wished I had time for photos, but I didn't, tomorrow I would take photos. 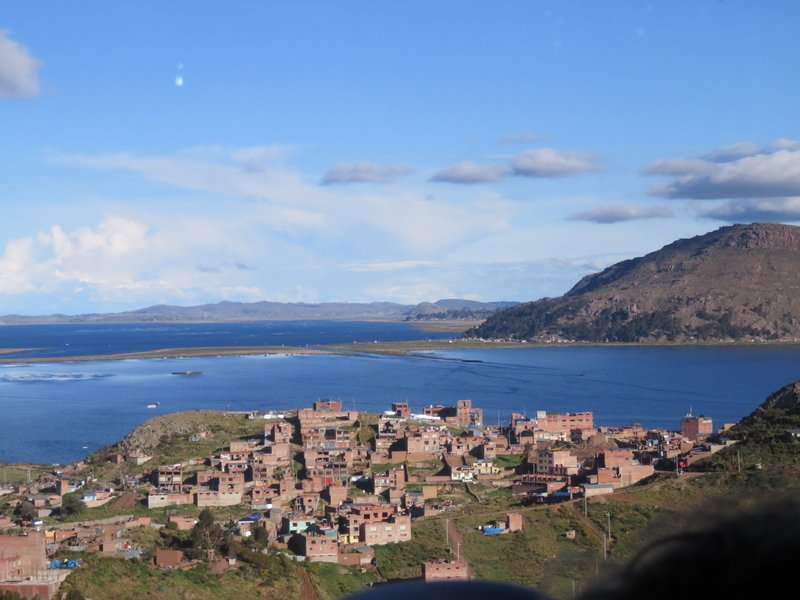 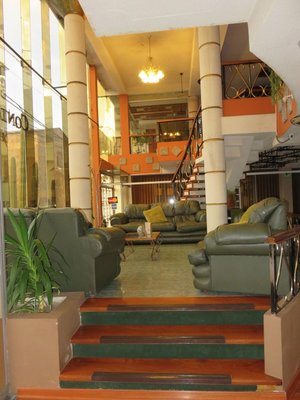 The bus station was big and busy, but I soon found my way out and took a taxi to my Hotel - (Hotel Conde de Lemos). The Hotel staff could speak English a were friendly and helpful. My room was great! I had an enclosed glass balcony from which I could sit and watch the daily life in the square. The bathroom was a good size, the bed comfortable and the area was quiet. The dining room was nice and so was the buffet breakfast. I liked that the Hotel had a lift, free cocoa leaf tea and a comfortable lounge area to wait in. The position was good, infact everything was, so if I came to Puno again, I would definitely stay here again. 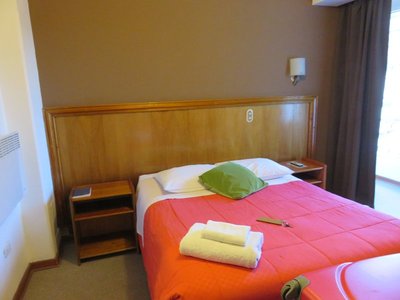 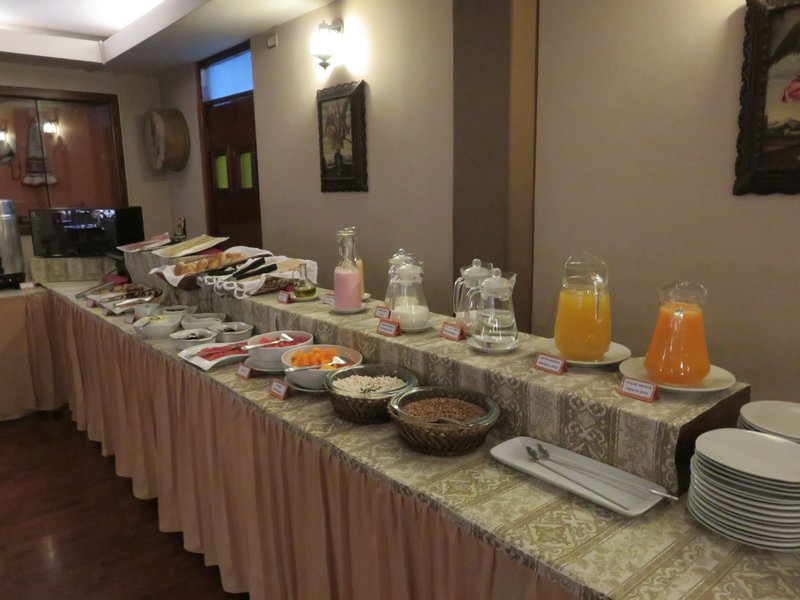 Once I had settled in, I went for an evening walk to find a travel agency to book my bus to La Paz in Bolivia and a tour of Lake Titicaca. 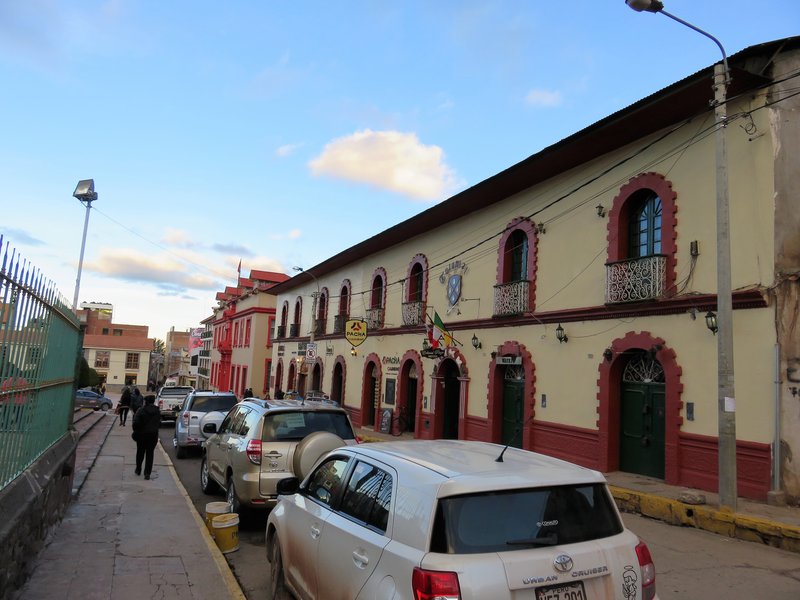 The evening was very busy, lots of Peruvians were in the main plaza and streets, street vendors were kept busy selling meals to the locals. I was successful with my bookings, so I had my dinner out before heading back to the Hotel for the night.

It was another good day with lots of wonderful scenery.

Tomorrow I am going on a tour of Lake Titicaca

This sounds like a fascinating tour.
I assume the sheep and llamas did not want you to pay them for taking their pictures.

Don, the tour was very interesting. I think if they could charge for a photo of the sheep, they would!

This blog requires you to be a logged in member of Travellerspoint to place comments.

If you aren't a member of Travellerspoint yet, you can join for free.